What is Integral Theory?

Integral Theory is a post-disciplinary meta-framework that incorporates the insights of various systems of thought and research findings (Wilber, 1995, 2000, 2007). Appreciating the work of numerous developmental scientists (Loevinger, 1976; Kohlberg, 1981; Gilligan, 1982; Piaget, 1972; Freud & Strachey, 1960; Fowler, 1981; and many more), as well as the study of multiple intelligences (Gardner, 1983) and emotional intelligence (Goleman, 1995). Wilber (2000) identifies various lines of development, each of which involves movement through increasingly complex structural stages expanding strengths in particular areas. Together, these developmental lines play a role in one's overall developmental level of awareness. Interaction between the individual and the collective facilitate this developmental process (Wilber, 2000). Esbjorn-Hargens (2009) provides a helpful overview of Integral Theory. Thus, Integral Theory is a comprehensive map useful in considering various dimensions of complex social problems faced in the 21st century.

The Integral Theory framework is also known as "AQAL." This stands for all quadrants, all levels, all lines, all states, and all types.

Representing the way in which the individual and collective arise together, the four quadrants are perspectives, or dimensions, of any occurrence. Here, the quadrants are depicting the perspectives that can be taken on the question, "What is a Human Being?" 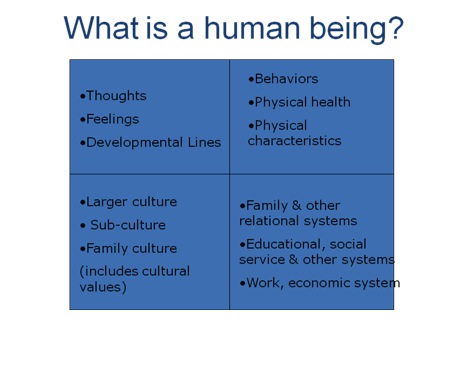 Integral Theory also recognizes that people have access to a variety of states of consciousness that are available at any stage of development. These include waking, dreaming, and deep sleep as well as phenomenal emotional states, meditative states, and drug-induced states. In addition, Integral Theory includes attention to the way that different "types" express at various developmental stages. These include masculine and feminine gender types, personality types (such as Myers-Briggs or the Enneagram), and other typing systems. Together, all the aspects of the AQAL framework are presented in the following diagram: 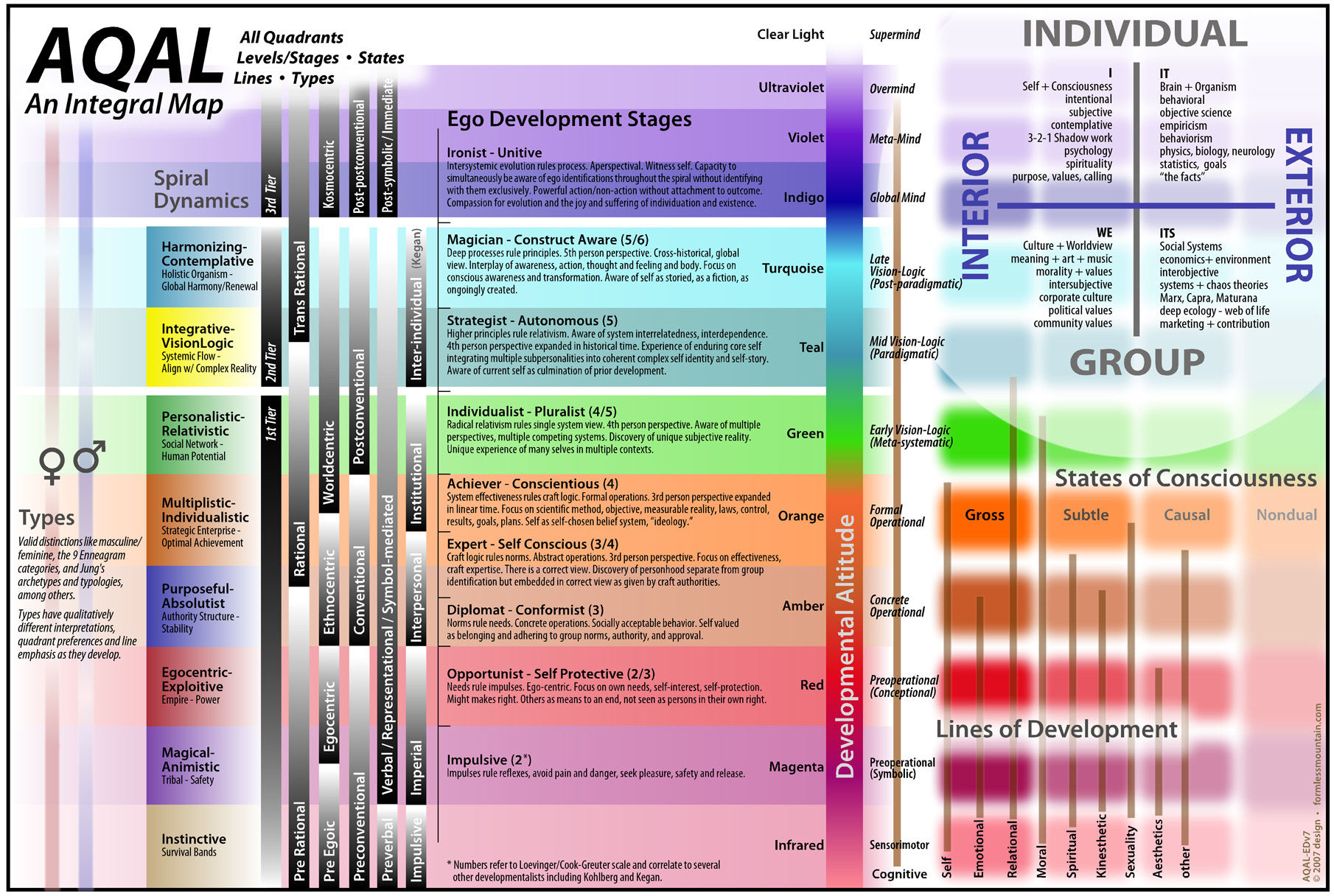 As a post-disciplinary framework that transcends and includes the theoretical bases of existing disciplines and professions, Integral Theory is being applied across disciplines and professions. Many are finding that the Integral map fosters the ability to take multiple perspectives and combine approaches for a more powerful impact on serious social problems ranging from climate change, "culture wars", and homelessness.

Furthermore, with the support of this comprehensive map that appreciates and includes the contributions of all perspectives, Integral leaders are capable of guiding post-disciplinary, transdisciplinary, multidisciplinary, and interdisciplinary teams.

The following links demonstrate just a few of the ways that Integral Theory is being applied to a diverse fields: